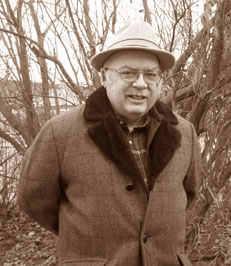 If it weren’t for Noted Historian and author Ross Curry, much of the Dells’ area history would be lost. Curry, who lived in the area all his life, published ten books.

Ross’ books include three genealogies of early settlers and four histories of the Wisconsin Dells area. Nearly all aspects of pioneer life in the Dells-Sauk County area are covered in these history books with many pictures and illustrations.

After graduating from local schools he attended what was Madison Area Technical College in Madison in 1948 and 1949. He worked two years on Mauston newspapers before spending the next 40 years working for the Wisconsin Dells Events newspaper, the longest anyone has ever done so.

Ross and Sylvia were active members of Baraboo Assembly of God since marriage serving in a variety of positions.

Ross has written 10 books, mostly in retirement. Three are genealogies and four are local histories. He wrote Kilbourn Klippings for many years and wrote mostly historical articles nearly every week, then later, monthly, for the Wisconsin Dells Events.